In a recent webinar, guest speaker and Gen Z expert, Tiffany Zhong, Founder and CEO of Zebra Intelligence along with our very own, Lija Hogan, Director of Strategic Research Services, dove into our recent study that measured the impact that Apple iPhone ads have on consumer sentiment and preference for different age groups: specifically, Gen Z vs. Baby Boomers.

We had a great Q&A session with Tiffany and Lija and included some of our favorite questions below, or you can watch the full webinar here. Enjoy!

Are there any findings from the study that surprised you?

[Lija] I think the biggest one that surprised me was how concerned people were about their privacy and security based on these features and functions that are integrated into the phone. I was surprised that was something that made participants less likely to want to buy phones with those features.

I think that Apple is again making a play here to start to move people in the direction of trying to evolve their own thinking about what it is that they will and won't do to complete interactions. We'll probably see that, as time goes on, people will start to accept and adopt facial recognition in more ways. For example, this is already starting to happen at airports where TSA has facial recognition. I thought that was really fascinating and a big statement on where we're going.

What are the birth years for Gen Z?

Are there any common misconceptions about Gen Z?

[Tiffany] One of the biggest misconceptions are that Gen Z has a short attention span. But if you think about Netflix, and how Netflix bingeing is a meme, clearly kids can focus if it's high-quality content that they care about and that they're immersed in. Another one is that Gen Z doesn't have the money or spending power, but they do.

Can you share more detail on how the study was conducted?

To do this, we first set up a test script where we asked people some questions about what their brand preferences were, how they got them, and some user demographic information. Then we had them watch the ads via YouTube. After they watched the ads, we then had them answer some questions about the ads that were of a more rating scale-type questions.

We see a fair number of our customers using the platform to study video content right now to get a sense for whether or not it's resonating for folks, what they think, and what questions it's answering.

Do you see any trends that segment the habits within the range towards older Gen Zers versus the more younger Gen Zers?

[Lija]I do think that there is a difference between targeting the older versus, the younger Gen Zers. If you just think about where they are in their lives right now, you've got essentially high schoolers all the way down to elementary schoolers, and they're doing different things.

You know, Pokemon Go was the rage a couple of years ago among the elementary school set and being able to unlock your phone quickly is something that's pretty important for high schoolers who are often on their phones all day long.

I also would heavily consider targeting less based on age and more based on psychographic details. A 16-year old in Wisconsin may be very different than a 16-year old who grew up in New York or Idaho or Texas. Age isn’t going to be the only thing that drives them apart. Their upbringing, their interests, their personality, their friends, all sorts of different factors play into putting different types of Gen Zs into cohorts.

Given the large number of participants in the study, would you say that much footage is statistically significant?

[Lija] So I will say that it was a lot of footage. I spent a lot of time watching videos. You know, for all of that we did collect information that was really about those ratings-scale questions, and that's where you'll really focus on trying to create statistical significance, really not in the footage.

The short answer would be that I wouldn't say that it's statistically significant, but the really important answer here is that we were looking more for that qualitative understanding of why it is that people across the different age cohorts felt the way they did.

Get all the data and insights by downloading the full report here.

To learn how UserTesting can help you understand your customers through on-demand human insights, contact us here.

Learn effective strategies to gain support from key executives and stakeholders for enhancing your CX. 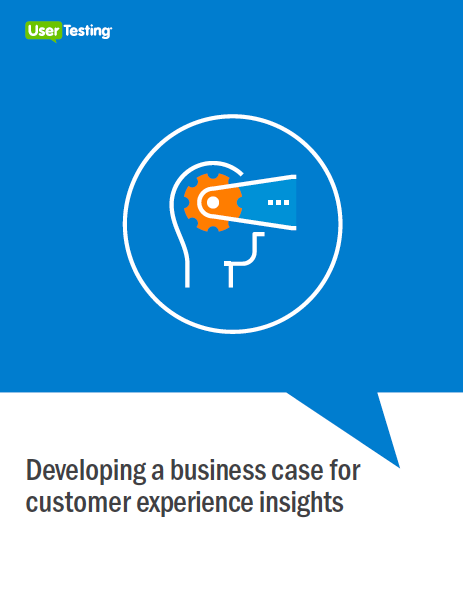