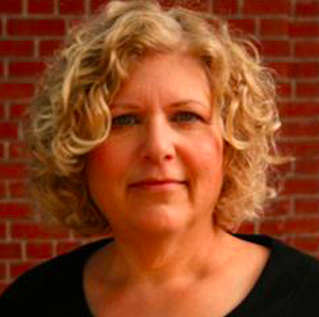 What Every Designer Needs to Know About People

Susan Weinschenk has a Ph.D. in Psychology and is a world-renowned expert in applying psychology to design. She recently published a book entitled 100 Things Every Designer Needs to Know About People, which masterfully presents principles that are necessary for anyone who wants to design with users in mind. We wanted to give you the chance to get to know her a little bit better. Plus, if you like what you read, then be sure to watch the amazing webinar that she gave to some of our clients.

You went to school studying the brain and psychology. When did you realize that these things would be useful for designing more usable websites?

When I did my Ph.D., the Internet didn’t even exist. But even back then, I had the initial idea that psychology could be applied to the design of technology in general. The first time I had the idea was actually the first time I ever interacted with a computer. I was in graduate school taking a programming class to fulfill my language requirement. This was even before personal computers, so I had to go to the computer center and run a card through the computer. I wasn't a very good programmer, and the first thing I ever programmed returned a card with the message, "Job Aborted." This is when I realized that computers were developed for use by computer scientists, not everyday people. 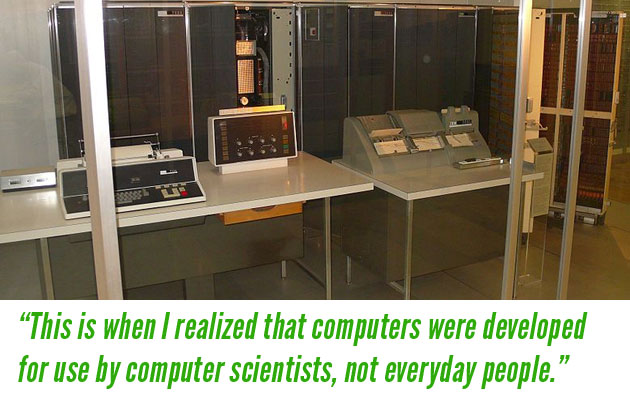 The idea of applying neuroscience to websites actually occurred to me in the shower, which is no accident. It was at that moment that I put together all the reading I had been doing on unconscious mental processing with websites. This was the moment that Neuro Web Design was born. In today's thinking, many people are used to the idea of neuro-marketing and neuro-web, but back then, when I put these two ideas together, it was kind of a new idea.

What do you think is one of the largest misconceptions that people have about usability? In other words, what do people think they know about people that is wrong? 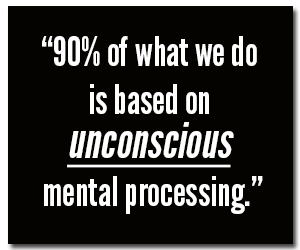 There are so many! I'll give you two. The first thing that most people think they know about people is that people are taking actions based on logical decision making processes. However, what we know is that 90% of what we do is based on unconscious mental processing and we have not a clue as to why we're doing it! But we don't like that about ourselves so we can talk ourselves into the idea that we know why we're doing things. That's a huge mistake people make, thinking that they just need to clearly explain something on a website and people will make the right decision.

The other mistake people make is that they think they know what their audience needs. Whether doing interface design or developing content, people assume they know what their audience wants and needs. The fact is, they don't. Most likely they haven't done enough research about the customers or they haven't been able to put themselves in the place of their customers. Therefore, they end up developing something that they think is wonderful and really does the job, but their target audience is left scratching their head. This is, of course, why you need to do user-centered design and user testing.

Designers typically think of usability in terms of buttons, pictures and shading and maybe (hopefully) interaction, but content can often times get lost. How important is content to this whole process?

Content is everything, of course. Everyone along the process needs to be thinking of these issues, of humans and psychology. There are different people who do the design and the programming and it’s difficult to focus on the design and programming aspects along with the perspective of who is going to be using the site. It's very hard to switch back and forth. Because it is hard, I think you always need someone on the team to advocate for the human.

Since you published Neuro Web Design in 2009, what has gotten better in online usability?

I think we've gotten better at visual presentation. This is mostly due to the adoption of mobile devices. Designers can no longer build something assuming that their audience is sitting at a desk with a large screen in front of them. Much of responsive design is thinking about what is the most critical thing that users need to see. This is a large part of what you should be doing regardless of what you're designing for! Every department wants their content on the homepage, but with mobile in the mix, designers are forced to choose the most important. So I think mobile and responsive design has forced us to do a better job in designing for the user.

One thing that is really beneficial in your book 100 Things Every Designer Needs to Know About People is that you share a lot of timeless principles. How do you apply these principles and still be relevant as technology changes?

When I cite work done on human psychology I often cite research that was done as far back as the 1960's. This is somewhat atypical for a book centered on technology, but these principles of human behavior have not changed and are not likely to change anytime soon. What does change is people's expectations of technology.

Another thing to keep in mind is that expectations primarily change generationally. There is a lot of research on the expectations each generation has of technology, even unconsciously. This all goes back to understanding that you are not your target audience, especially if you are in a different generation. Generationally, there is something interesting that is going on. Generation X, roughly ages 35-50, is doing most of the design work, but is the smallest generation. They're bookended by the huge demographic of the Baby Boomers and the huge demographic of the Millennials. They're designing for everyone, but are the smallest group. Therefore, it’s even more critical to understand that if you're designing for someone that's not like you, the assumptions that you have may not be correct.

One of your timeless principles is that people are lazy. Recently, Etsy released infinite scroll on its site, assuming that people would rather not switch pages, and it failed. It seems there may have been other human principles at work. What do you do when two principles conflict? Do you have any guidelines on how to weigh conflicting rules like this?

Humans are full of contradictions. On the one hand, people are lazy and don't want to work too hard, but on the other hand, people have a desire for mastery and will do things that are really difficult for no gain at all. What's that about!?

In your example, one idea we can always apply is the hierarchy of human loads. We know that there are cognitive loads, visual loads, and motor loads. It takes more work and more energy for me to think about things and remember things than it does for me to look at things. And it takes more energy for me to look at things than it does for me to move my fingers. So whenever you have to make a tradeoff, you always need to make it in terms of this hierarchy. So in the Etsy example, it was easier in terms of motor load and maybe even visual load, but it was more difficult in terms of cognitive load. They were given too many choices and we know that when given too many choices, users will often make no choice at all. 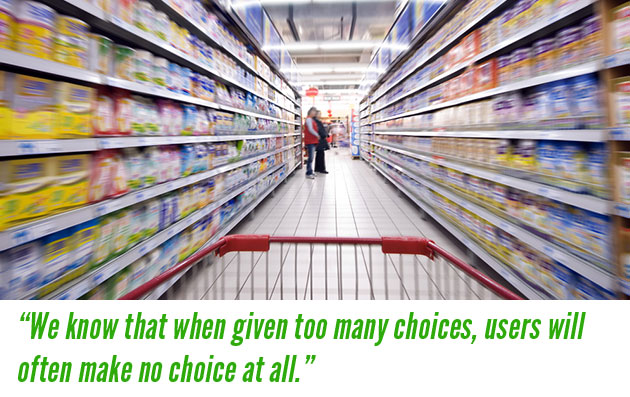 Another principle we could apply comes from the book I’m currently working on, How to Get People to do Stuff. In that book I talk about motivation, and the seven different drivers of motivation and how some are more powerful than others. So what’s important to understand in the Etsy case and whenever you are weighing conflicting principles is that there are some things that motivate people more than others.

P.S. Want to learn more about the hierarchy of human loads?

See Rule Number 28 in 100 Things Every Designer Needs to Know About People.

Designers typically have art backgrounds, programmers have computer science backgrounds, and neither of these degrees typically involve a lot of psychology. Besides coming to the webinar and reading your book, what are some other things that designers and developers can read or study to apply the principles of psychology to their work?

I think it's tough. There is still not a lot out there about psychology for designers in bite-size form. There are a couple of interesting developments, however. One, that doesn't apply to everyone, is that I'm actually going to be teaching a class, starting this week, at the University of Wisconsin in the design program for their computer science department. So I think we're going to start seeing this more and more as part of degree programs. I'm actually in conversation with another university as well that is thinking about adding this to their curriculum for computer programming. I'm also working on a course for udemy.com on this topic actually. So I think there will be more courses like that to help people that are interested. 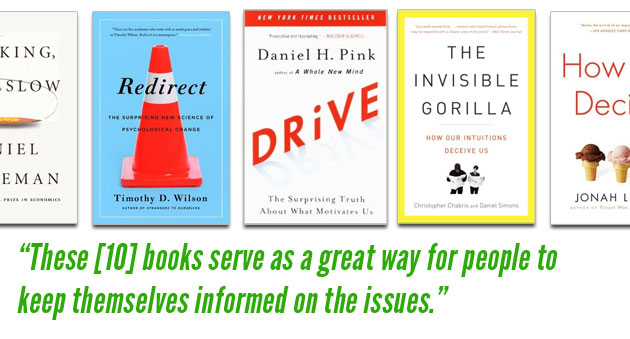 There are also lots of easy to read psychology books, not necessarily about design, but that are still important. I have a list of the top 10 psychology books you should read on my blog. These books serve as a great way for people to keep themselves informed on the issues.

How do you best organize your team with the human user in mind?

For even more information, be sure to watch Dr. Weinschenk's webinar "What Every Designer Needs To Know About People." Click here to watch. 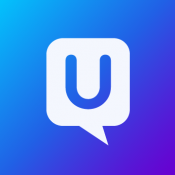