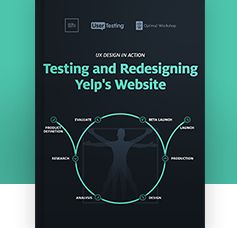 Last week, we gave a sneak peek at our upcoming eBook, UX Design in Action: Testing and Redesigning Yelp’s Website. In this eBook, we teamed up with UXPin and Optimal Workshop to imagine a redesign of Yelp, starting with gathering user feedback about the current site and ending with a prototype of the new version.

Today, we’d like to share the first step in our UX design process. Before we even started testing Yelp, we wanted to step back and think about the big picture. What does Yelp do? Who is its audience? What is its business model?

We knew that these important questions would inform our research and our eventual redesign.

Understanding Yelp's product and user base

Yelp has a very large user base: over 138 million unique monthly visitors, according to Yelp’s Q2 2014 numbers. While many of their users are located in major metropolitan areas, they span a very broad range of demographics, including age, income level, and education level. This large, varied customer base is one of Yelp’s most biggest strengths.

Yelp’s unique value as a business lies in its reviews. Users write reviews that help other users discover local businesses, and then those other users write reviews, creating a “viral loop.” With its current number of users, Yelp is financially attractive as an advertising platform.

Testing with the right users

With these things in mind, we decided that our redesign of site would need to strongly appeal to current Yelp users, not just new ones. After all, it wouldn’t make any sense to launch a new version of the site that 138 million current users hated! We agreed to run our user tests with current, semi-frequent Yelp users.

To be one of the first to learn about the UX design process we took to imagine a redesign of Yelp, sign up for our upcoming eBook!

Taking insights to the next level: July 2020 product releases

Connect with your own audiences through UserTesting’s My Panel

Suggested Sentiment: increasing speed to insight with the power of machine learning

Jira integration: on-demand human insights where product decisions are made