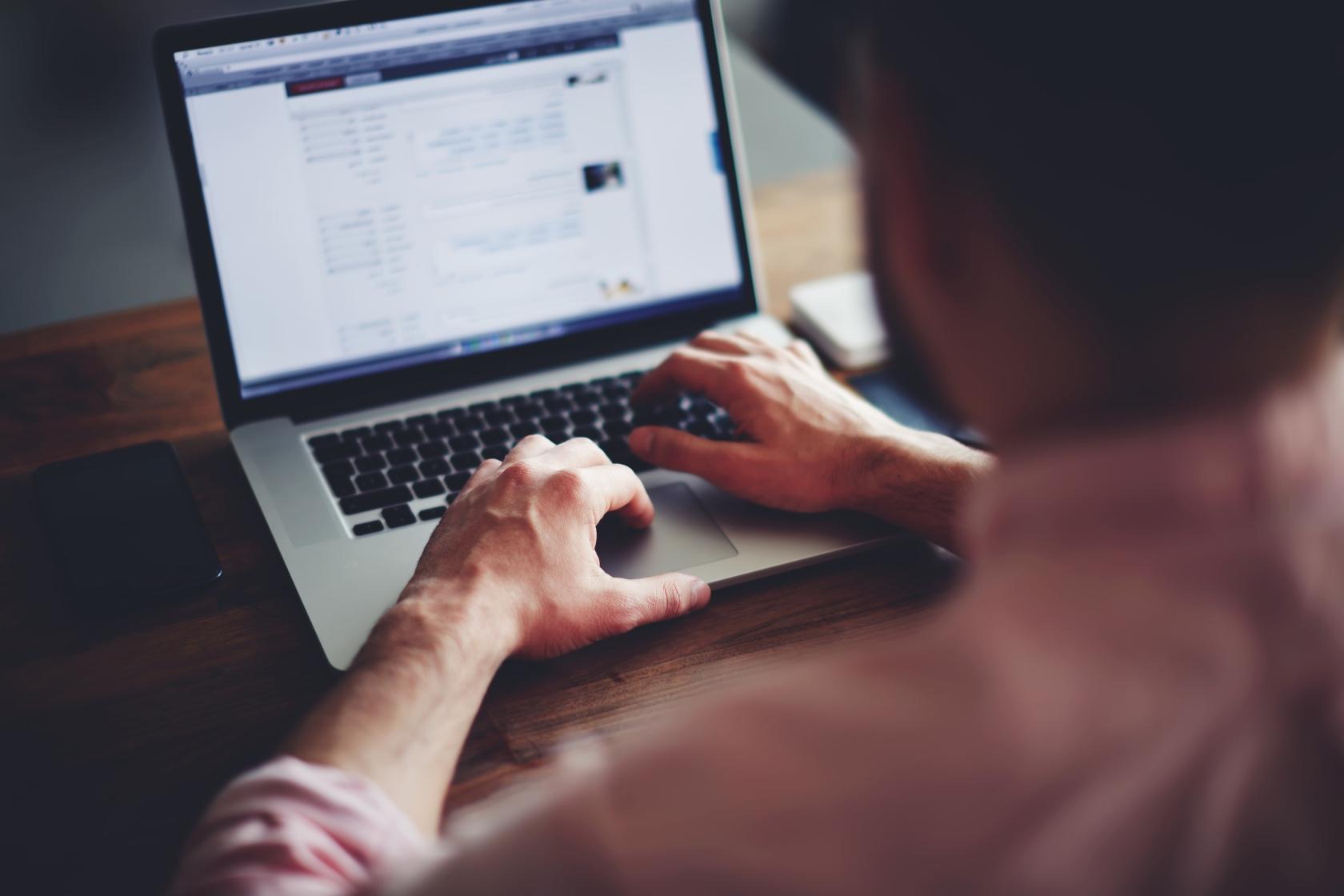 You must learn about human psychology to design compelling user experiences.

If you understand how the human mind works, it’s easier to get people’s attention and keep it. It’s also easier to get them to take some form of action (like subscribing or buying).

But how do you find out what goes on inside the mind of your users? Well that’s where psychological triggers come in. They’re invisible forces that influence and persuade people. And when you use them in your design you can get more people to say yes to what you’re asking.

In this post I’ll break down psychological experiments and academic research into simple, actionable steps that can help you design better experiences that lead to more sales online.

The principle of reciprocation tells us that if we do something for other people, they want to return the favor to us. If you give your users something useful before you ask them for anything, they’re more likely to reciprocate by doing business with your company later on.

In 2005, social scientist Randy Garner conducted an experiment to test whether or not hand-written sticky notes could persuade people to respond to a survey.

One third of the surveys sent out included a personal hand-written note on a Post-It that asked recipients to complete the survey. One third had a blank Post-It note, and one third didn’t have a Post-It note at all.

Here were the response rates:

Not only did the surveys with the hand-written note get double the response rate, the quality of the answers were better too. But why did they perform so much better?

Well, when people received the hand-written letter they felt like someone had done something nice for them. And when people do things for us, we feel like we need to repay them.

Author and psychologist David Straker said, "The inner tension created in the gap between receiving and giving is often so powerful we will give anything in return just to reduce this discomfort."

That’s why Costco gives out free samples. If they give you a free sample of a Bagel Bite, you’re more likely to reciprocate the favor by buying a box. And even if you decide not to buy them, Costco’s still building goodwill between you and their brand.

How to apply reciprocation in your design

Give useful information away for free

This could be a white paper, newsletter, articles, tips, checklists, cheatsheets, social media posts, infographics, webinars, podcasts, or videos (to name a few).

Offer a useful service for free

This could be free shipping, or something else that helps warm up your customers to make a purchase. 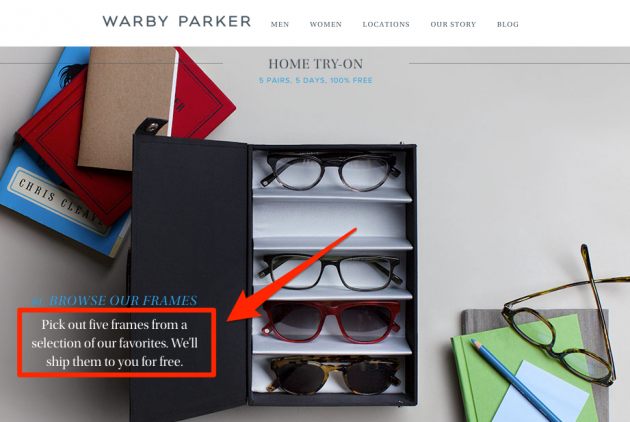 The principle of social proof tells us that when people aren’t sure what to do, they look to the behavior of others to guide their actions—especially their peers. If we see a lot of other people doing something, we tend to view it as the correct behavior.

In 1969, the social scientists Milgram, Bickman, and Lawrence conducted an interesting experiment in Manhattan. They had a single actor stand on a busy street corner and stare at a window on the sixth floor of a building for sixty seconds.

New York Times bestselling author Robert Cialdini said, “Whether the question is what to do with an empty popcorn box in a movie theater, how fast to drive on a certain stretch of highway, or how to eat chicken at a dinner party, the actions of those around us will be important guides in defining the answer.” That’s why comedy shows have used laugh tracks for such a long time.

How to apply social proof in your design

Help establish your trustworthiness by highlighting your affiliations will well-known organizations.

Show users how many other people have followed your brand on social media or subscribed to your list.

Show users how many times other people have shared your content.

Having high ratings and a large number of reviews shows users that a lot of people use and enjoy your product.

Show your customers the other kinds of products that people similar to them have shown interest in.

When testimonials are done right, they build trust by showing your prospects that your organization has gotten results for other people like them. 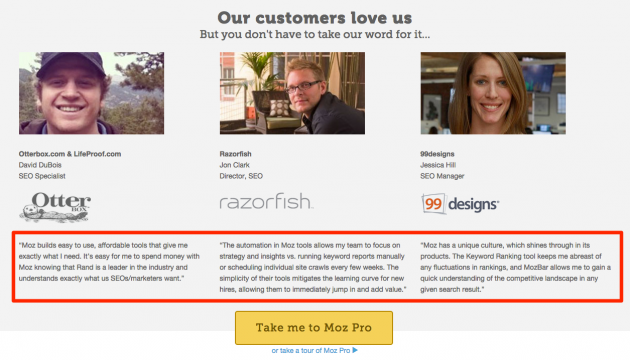 The principle of scarcity tells us that people tend to want what they can’t have. We place higher value on things that will soon be unavailable to us, and a lower value on what’s available in abundance.

In 1975, researchers Worchel, Lee, and Achewole conducted a study to figure out how people would value cookies in two identical glass jars. Jar A had ten cookies and Jar B only had two cookies. Which jar do you think people found more attractive?

Well, even though the glass jars and the cookies were exactly the same, the participants placed more value on the cookies in Jar B. Perhaps even more interesting, the researchers also found that:

“Cookies were rated as more valuable when their supply changed from abundant to scarce than when they were constantly scarce.”

It’s basic supply and demand: as availability decreases, demand increases. The less there is of something the more valuable it becomes. That’s why the diamond company De Beers only circulates a limited number of diamonds each year. Diamonds are found abundantly in nature. But since there’s only a small amount available, the demand is higher, which allows De Beers to increase their prices accordingly.

How to apply scarcity in your design

Get users to take action by making thing available for a limited time only. This could include sales deadlines, limited time discount on abandoned cart items, or time bound purchases for next day shipping. 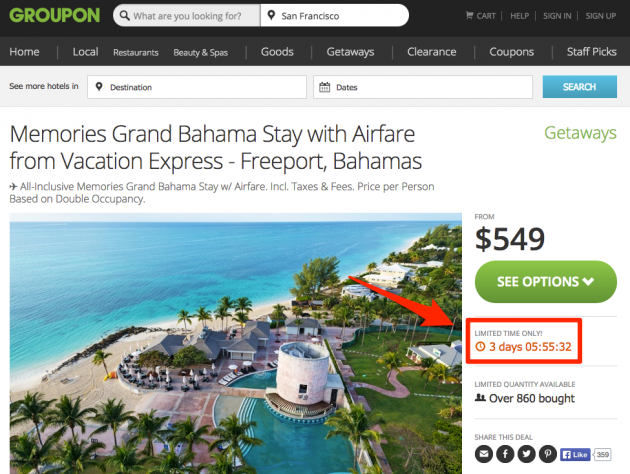 Highlight products that are in short supply

Display a stock meter when an e-commerce product is almost out of stock.

Offer exclusive deals and information to a private list of people who have to opt-in to receive those benefits. 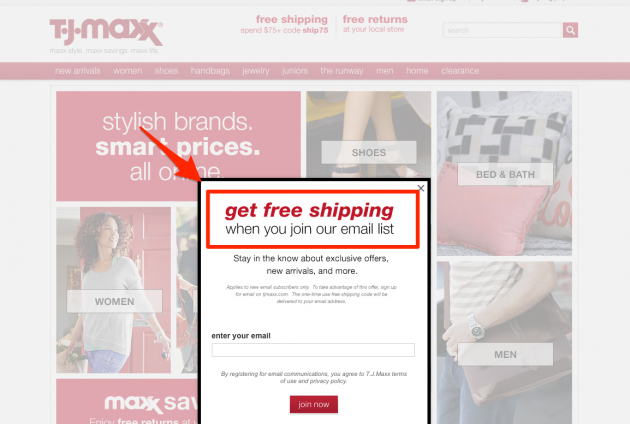 The principle of framing tells us that people make comparisons when they’re making a decision. Not only do users tend to avoid extremes, but they also respond to a particular choice in different ways depending on how it’s presented.

In his book, Priceless: The Myth of Fair Value (And How to Take Advantage of It), author William Poundstone dissects how a New York City restaurant called Balthazar’s uses the framing principle in their menu.

The upper right hand corner of their menu is usually the first place that customers look. They use this prime location to display their two most expensive plates—one for $115 and another for $170. 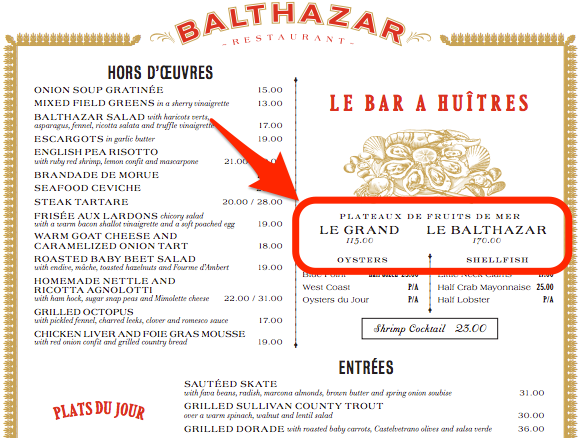 Poundstone says, “The main role of that $170 platter is to make everything else near it look like a relative bargain.” It makes sense. Compared to a hundred-dollar seafood platter, a $30 plate seems like a good deal.

How to apply framing in your design

Offer a premium, mid-range and budget option. Place each option side-by-side and clearly show the comparison of each.

This will make your mid-range option seem more appealing. Why? Because even though most people won’t pay the premium price, they also won’t want to miss out on some of the extras they’ll get. 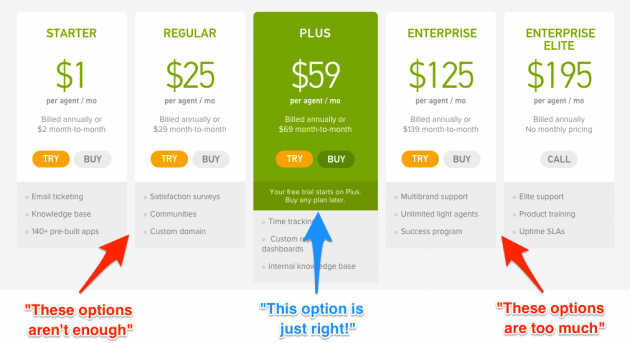 The salience principle tells us that people’s attention is drawn to that which is most relevant to them at that moment. By identifying these moments, you’ll be able to make additional offers and upsells when your users are most likely to be influenced.

Imagine you’re going to Sears.com to look for a new refrigerator. When you land on their homepage, what would you be more interested in: an advertisement for their financing plan, or finding the right fridge?

In 2002, Jared Spool from User Interface Engineering had a chance to study user behavior on Sears’ website. During his research, he observed that users were typically on a specific mission.

So, while fridge shoppers do want to learn about financing options, he found that most shoppers would be far more interested in this information after they’ve found an item to purchase.

After watching shoppers, Spool said, “There are specific moments when designers are most likely to influence a shopper to investigate a promotion or special offer. Most of the time, these moments come after the shopper has satisfied their original mission on the site.”

How to apply salience in your design

Up-sell during the checkout process

When your customer is checking out, offer them complimentary products or accessories to the product they just bought. 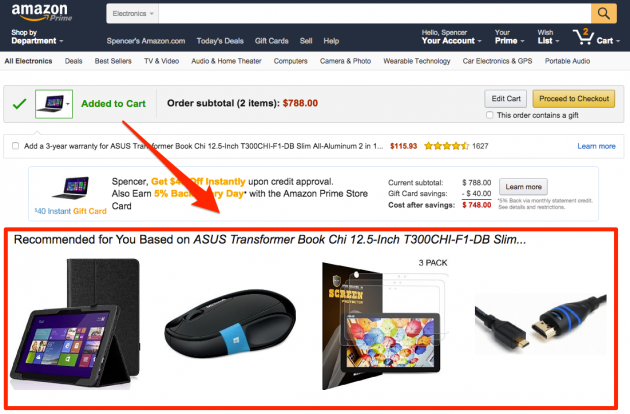 In 1933, Hedwig von Restorff conducted a memory experiment to figure out what makes things stand out in people’s minds.

When she asked the participants to recall which items they remembered from the list, she found that people remembered the blue items most often.

The contrast principle tells us that people are more likely to remember what stands out from everything else around it. In von Restorff’s experiment, the blue item made an imprint in people’s minds because it stood out from the rest of the black items. That’s why they were able to remember it.

Designers and marketers always seem to be looking for the highest converting color, but there’s no universal color that’s best for conversions. Derek Halpern, founder of Social Triggers said, “What stands out gets clicked, what blends in gets ignored.” The color that converts the best is the color that stands out the most.

How to apply contrast in your design

If you want your designs to accomplish business goals, you must become a master at persuading and influencing users. Using the 6 triggers outlined above, you'll be able to design experiences that turn strangers into leads and sales.

If you want to learn more about how psychology can improve UX design, check out Tim Ash's webinar on context and the power of framing.

And also: if you know anyone who would find this research as interesting as you, do them a favor and pass this on. 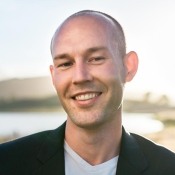