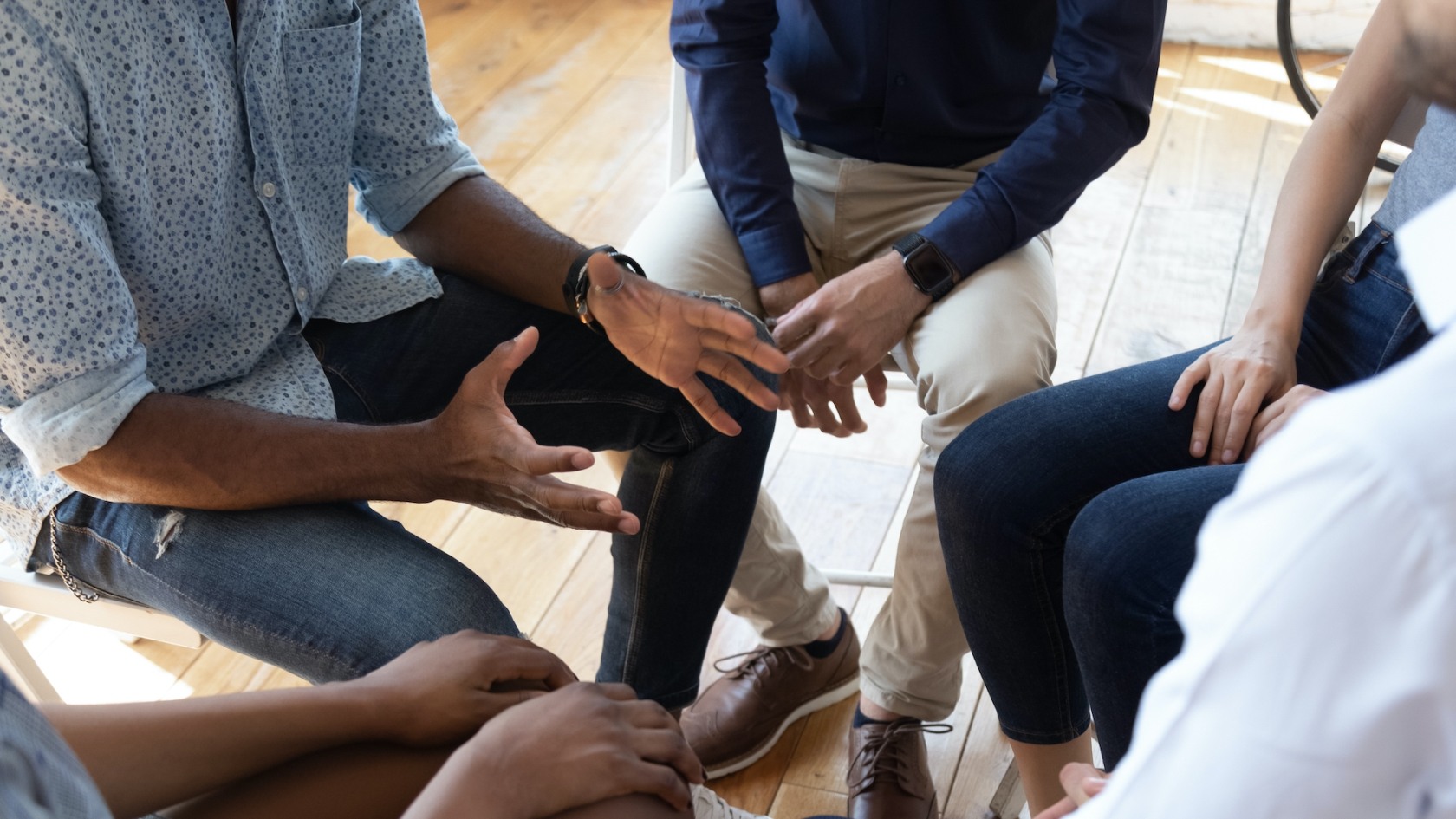 We’ve all recently been impacted by the virus, but to what extent varies from person to person. The United States is large—spanning four time zones, ranging in socio-economic status, and varying from rural areas to densely packed cities—so the impacts are felt differently across the country. Which has us wondering: how are people reacting and responding to this whole thing?

How satisfied or unsatisfied are the American people with the government's response to the pandemic? Are Americans worried more about the virus or economic stressors? How have their lives changed? Are businesses and people overreacting? Underreacting? Do Americans feel helpless? Supported?

The list goes on. Which is why we ran a national survey paired with online interviews, so we could better understand the full story: not just what’s happening, but why people are reacting the way they are, and how they ultimately feel about their situation overall.

It’s important to note that the general tone of the country is worried and emotional, but resilient. Not surprisingly, in many of the comments throughout the study, there were strong emotional overtones.

Here are some of the insights that emerged:

Hear what Americans’ would like to say to the country about COVID-19:

UserTesting conducted a survey with 841 participants on March 23, 2020, and the remote interviews were all conducted in the week around that time.

There were 800 survey respondents and 41 self-guided interviews. The margin of error is +/- 4 percentage points.

In order to paint a complete picture of the nation’s reactions to the coronavirus, it’s important to move beyond data (alone), by coupling it with real human reactions. Throughout the remainder of this post, we encourage you to not just read the statistics but watch the videos to learn how people feel and why they answered the way they did.

Before we move on to our detailed analysis, here are some quantitative highlights that emerged:

Concerns about the virus 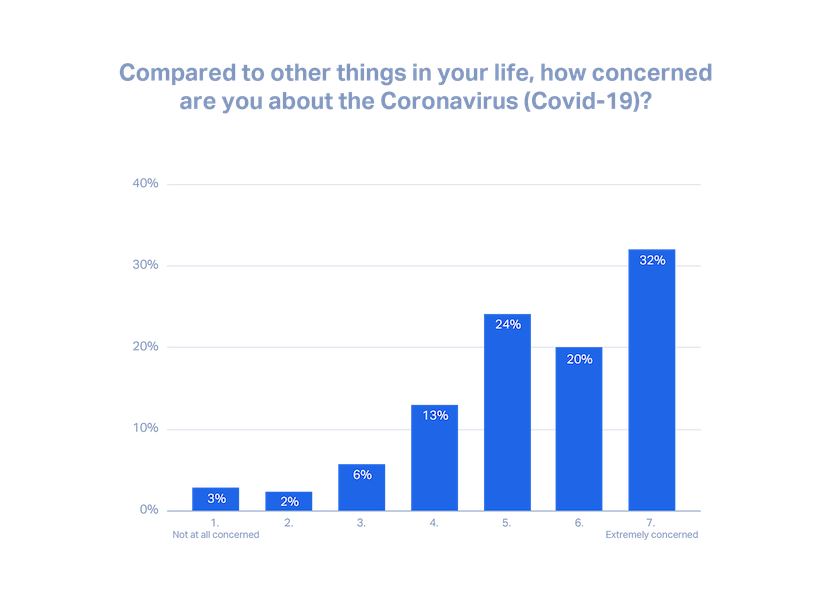 Listen to their worries:

Stop the spread vs protect the economy 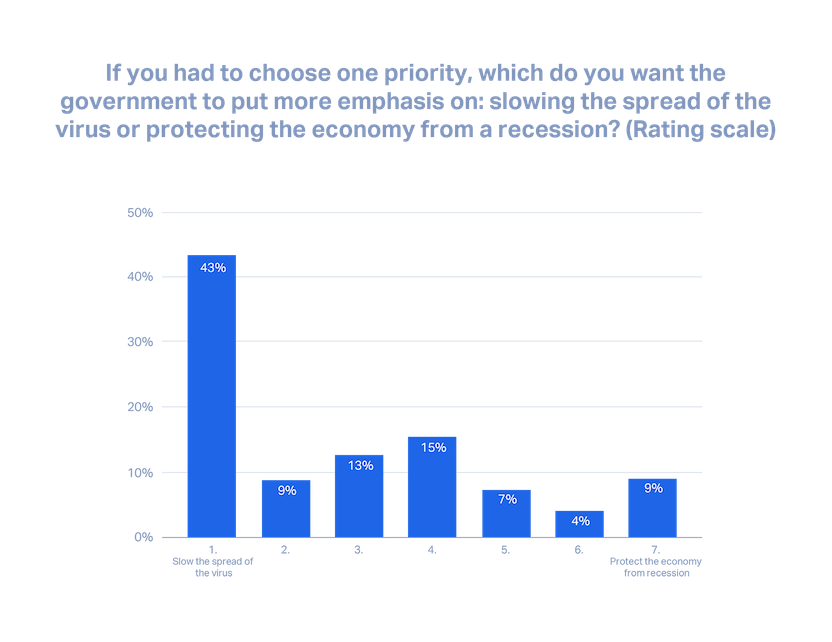 Hear how Americans view the tradeoff between economy and health:

Americans are of two minds on this issue. They say: 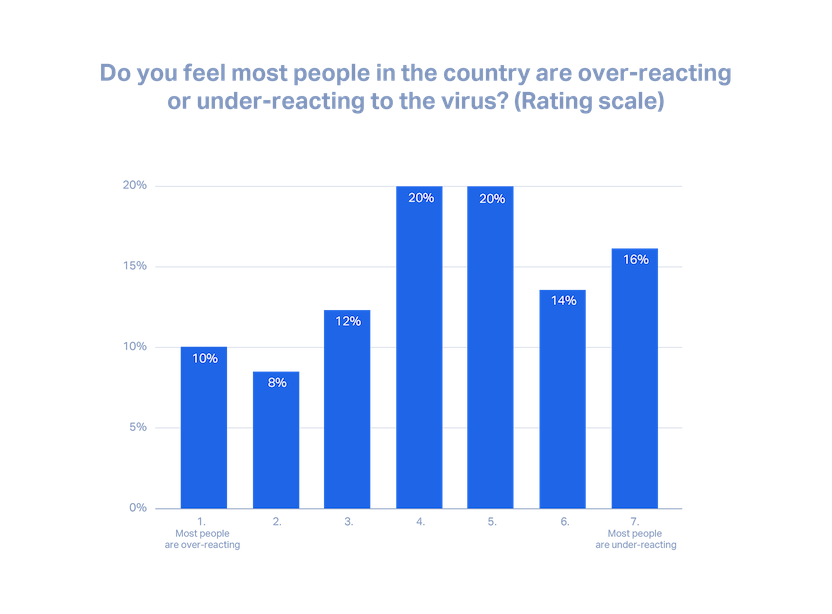 Hear Americans’ concerns about how others are reacting:

Finding trustworthy information about the virus

Participants cited doctors, scientists, and federal health agencies as the most trusted sources for information on the virus because they are viewed as well-informed and nonpartisan. Many people go first to health agencies when searching online for virus information. Here’s how the other sources stack up: 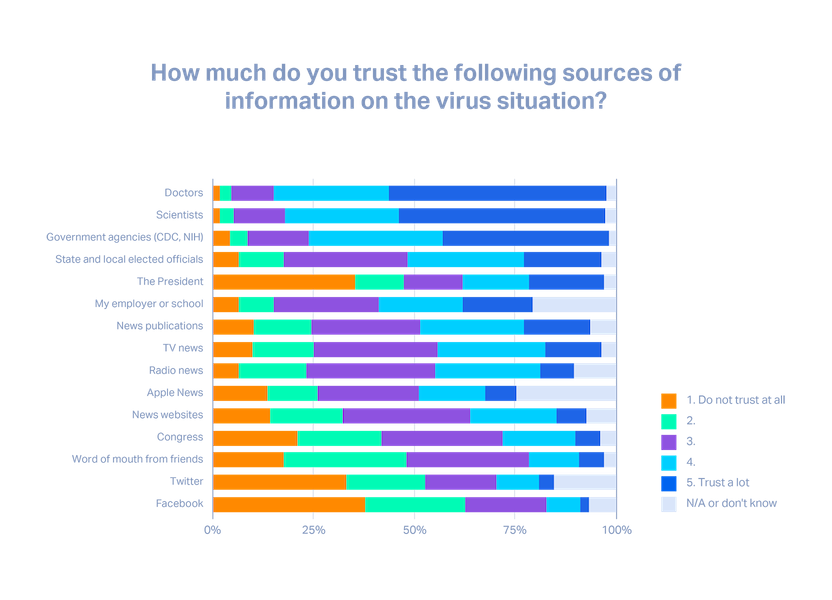 Listen as Americans explain which sources they trust and why:

Most people tried to prepare for the virus, but for many of them, supply problems got in the way: 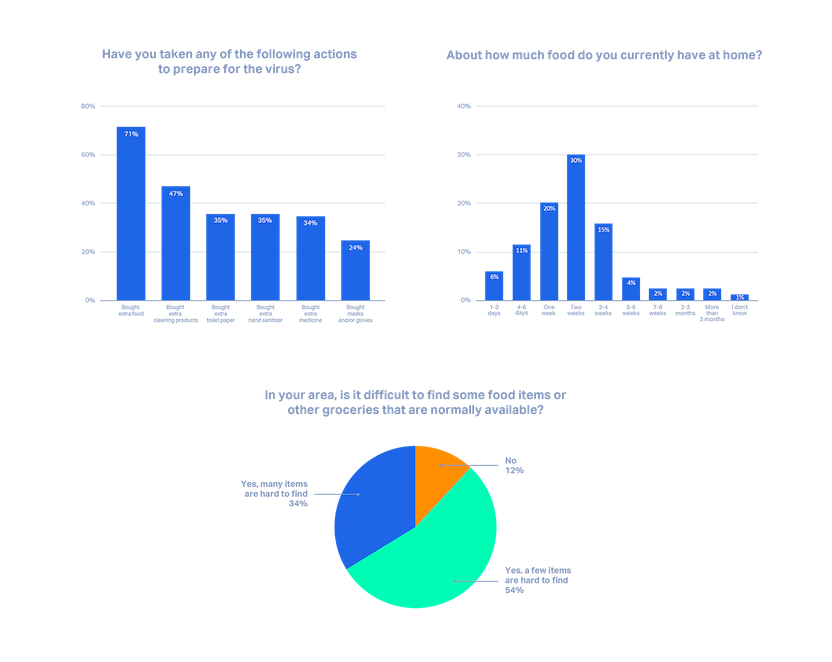 Listen to Americans discuss their preparation and frustrations:

Americans varied greatly when rating how their governments are handling the virus situation. Overall, local governments were rated a bit better than the federal government. 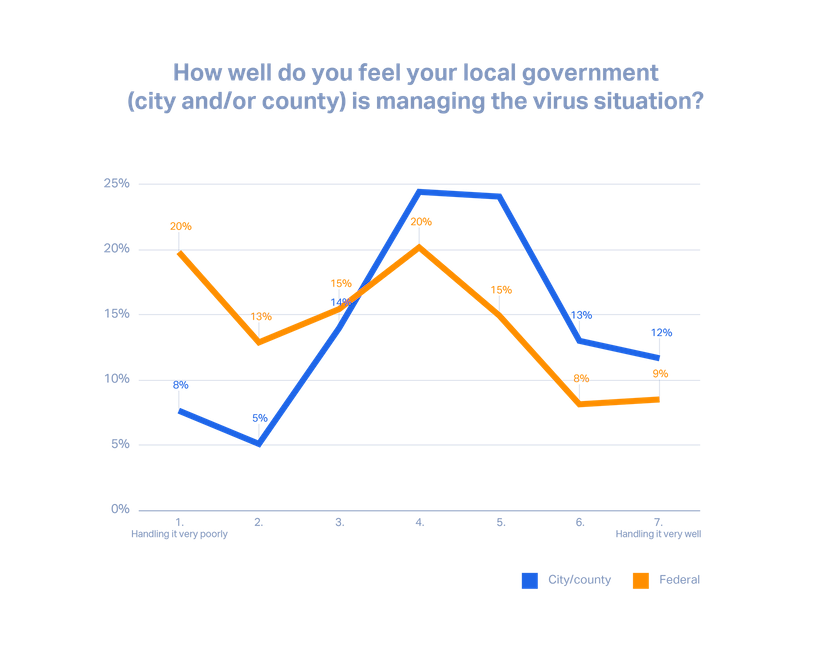 Listen to Americans describe their views of the government response:

Two-thirds of Americans said they are subject to a government stay-at-home order—an order not to leave home except for food and other essentials.

Across the country, these orders are affecting people differently: 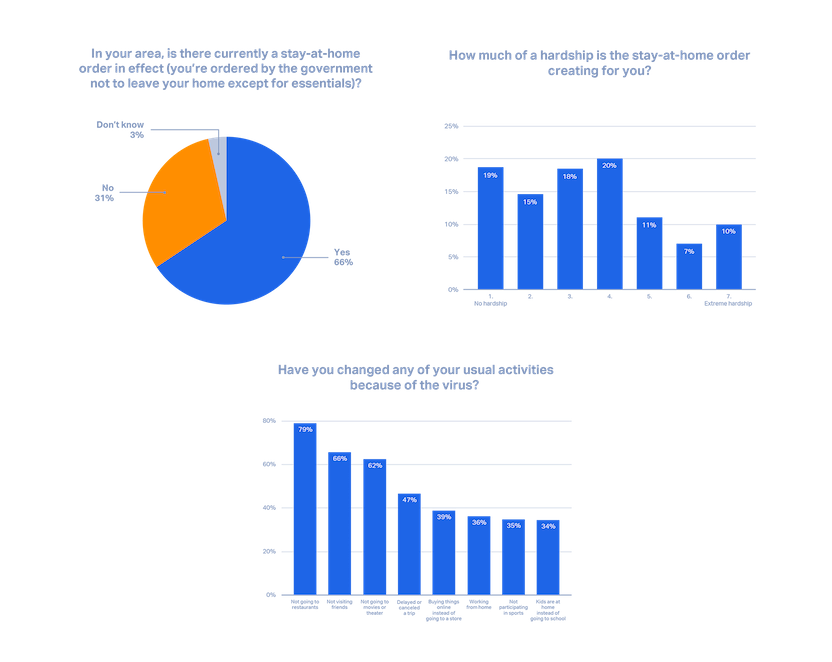 Listen to the hardships some Americans are experiencing:

The resistance to staying home is driven by several reasons: 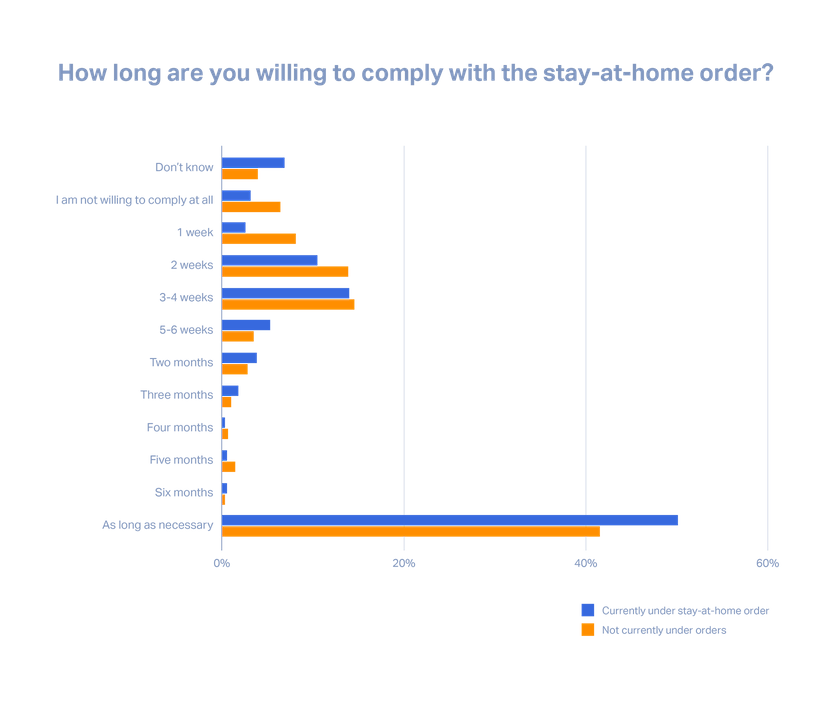 Watch Americans discuss their willingness to shelter at home:

What it all means for businesses

We’ll be publishing more research on the virus situation in future weeks. In the meantime, let us know if you have questions, or ideas that you’d like to see researched. And stay safe.

In this webinar we’ll share key takeaways from the research we've been conducting on the consumer impact of the current COVID-19 crisis, and how it’s changing customer behavior. 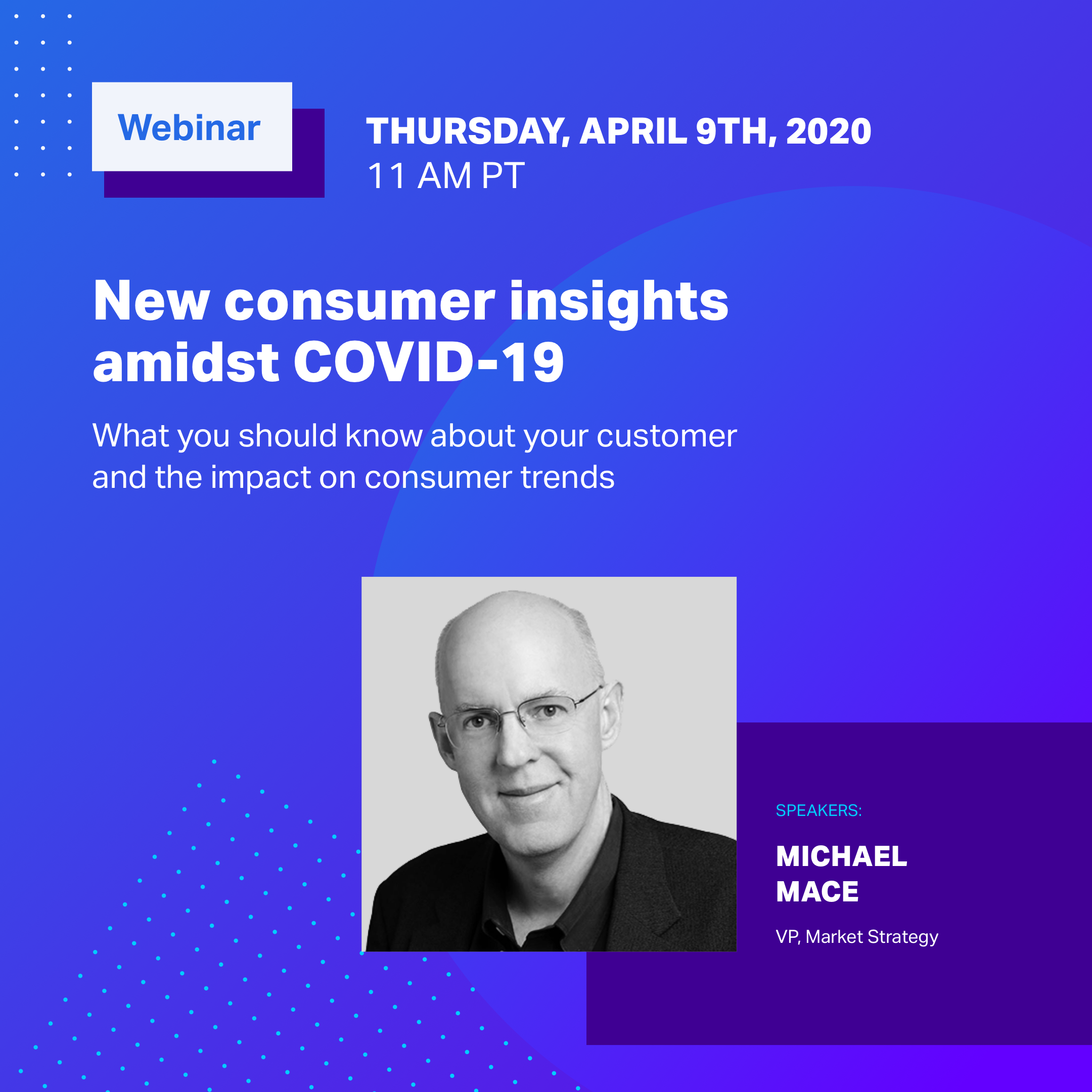 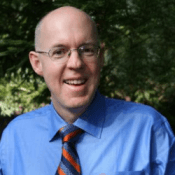