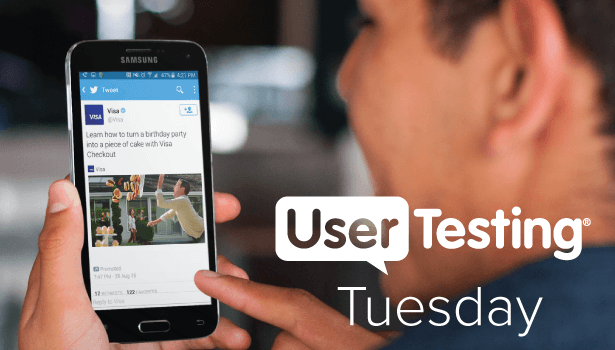 For most companies, Twitter, and other social media platforms are an essential part of their engagement with customers. Not just that, but they can be an easy way to build trust with past, present and future users. Amongst other social media techniques, understanding your audience can be invaluable in establishing or improving your social media strategy.

So in order to begin to understand how Twitter users explore their feed in the Twitter app and the platform in general, we conducted a study using UserTesting’s mobile recorder. We screened for individuals who used their Twitter app multiple times a day and had varying amounts of followers, in an attempt to collect qualitative insights from both power users and average users.

The power users were those who had 1,000+ followers while the average user group had between 200 and 500 followers. We ran 5 tests for each of these groups (power and average users).

Because this was a qualitative study, we focused on the thoughts that this group of users brought up. One thing we kept an eye out for was the tone of voice that users had during the study. As they were going through their Twitter app, were they delighted? Frustrated? Confused? We also paid close attention to the words participants used to describe their experience and their interactions with the different brands throughout the study.

The top two attributes that users associated with company twitter accounts that they liked were humor and relevance. Again and again, users brought these up when describing the qualities in their favorite brands.

Humor is difficult to achieve in a tweet of 140 characters or less, and it's not for every company, but when done successfully, users tended to remember the brand better and would be more likely to retweet or favorite them. One participant even claimed that he primarily followed Taco Bell for the occasional tongue-in-cheek humor that the account offered. He was more receptive to the branding and advertising of the company if it was accompanied with humor.

All users mentioned relevance as the key determinant in whether they would follow a Twitter account or skip over its posts. Despite the general importance of relevance, it was interesting how the different users framed their thoughts on relevance. The power users and average users in our study gave different replies about who they wanted it to be relevant to.

Power users tended to care more about whether it was relevant to their followers and associated this relevance with whether they were going to favorite it or retweet it. If a post wasn’t something that they thought others would be interested in, they didn’t give it much of a look.

Average users, on the other hand, wanted these tweets to be relevant to themselves. They expected the tweets they found to be informative about the company’s area of expertise. If they noticed that tweets were being recycled or repeated, though, they were unforgiving. They considered this repetition to be an indication of automation, which led some users to skip over posts from that company.

Standing out in the crowd

When our test participants scanned through their feed, they paid the most attention to tweets containing pictures or videos and some descriptive text. This was no surprise---our findings in this area further affirmed research from Buffer that says tweets with pictures are more engaging to users.

By combining this descriptive text, a relevant picture/video, and a link to more in-depth information, company tweets stood out more easily amongst the noise of Twitter home screens. 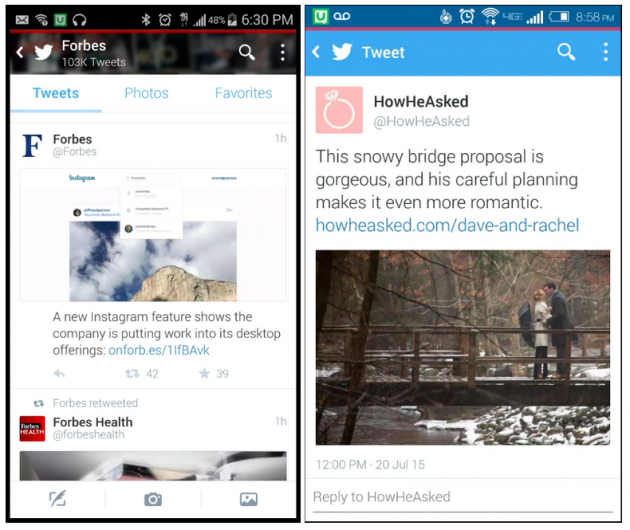 Users thought these tweets hit the sweet spot of descriptive text, a relevant picture and a link to additional content.

Rather than just linking directly to an article on another page, users preferred when tweets contained as much information as possible. Users didn’t want to take the extra step of clicking through to an article without first knowing what kind of content to expect. Users preferred when companies found creative ways in their tweets to address the information they wanted to know without just linking to the article.  By allowing a larger taste of the article in the picture and offering the link to the rest of the article as an option, participants felt less forced and more open to clicking the link. They also generally seemed to have a better understanding of what they were going to be reading.

Users didn't want to click a linked article without knowing what to expect.

When companies shared links to Instagram posts via their Twitter account, users found them pointless and rarely looked at them. They preferred to see the image or content on the Twitter app rather than having to navigate to a different app or website to see the picture and considered this to be another sign of automation. Minimizing the efforts they had to take when using the Twitter app to find information was essential to power and average users alike.

Wondering what the next steps are for improving and understanding your user engagement?

For starters, you can test your social media account with your target user demographics to understand what they expect in the content of your company’s posts. This will give you insights into how to increase brand engagement. Plus, you’ll get the chance to hear straight from your customers how they describe your brand.

Want to understand what users think when they first follow your account? Have new users follow you for the very first time. From there, you can gauge their initial impressions, how well they like your profile, and whether they understand what you offer. This will help you identify opportunities for improvement and understand what they are looking for.

Interested in knowing what other brands or influencers your users engage with?

Ask them to walk you through their favorite accounts that are related to your industry and have them explain why they like those accounts. You’ll find out about how you compare to competitors and may even come across some great accounts to partner with.

Your exploration of the user experience on your social media profiles is open to your imagination, but the above scenarios should be a good start, so get out there and get testing! 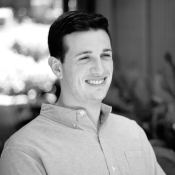 Michael is a UX Researcher at UserTesting. He's interested in helping companies to bridge the gap between customer insight and product development. In his free time away from work, he enjoys traveling, finding hole-in-the-wall restaurants, and doing just about any sport that involves water.