Why Keyboard Usability Is More Important Than You Think

David Sloan  |  October 08, 2014
The idea of pressing a key to enter text has been around for a long time. One of the early prototypes of what later became the typewriter was invented in 1808 by Pellegrino Turri for his blind lover so she would be able to write him letters—or so the story goes. [caption id="attachment_18399" align="alignnone" width="630"]

Image courtesy of Brenda Gottsabend.[/caption] Fast forward to modern times: the keyboard remains a key element in ensuring that people with disabilities are able to communicate and engage in everyday activities. As our communication technologies advance and we become increasingly reliant on websites and apps to facilitate our interpersonal interactions, we must not forget the critical role of the keyboard. This is the first of two articles in which we’ll look at why and how to provide an accessible, enjoyable experience for people who use the keyboard to work with websites and applications. Here, we look at the reasons why keyboard usability is such an important part of good user experience design.

We’re all familiar with typing for text entry, but it’s helpful to start a conversation about keyboard usability by understanding the two fundamental actions that form the basis of keyboard interaction with webpages and applications:Moving focus is normally done using the TAB key; activating the currently focused element normally involves using the ENTER key or the SPACEBAR key if the element is a button. With form elements, arrow keys also support navigation through menu options. These commands for moving focus and activating hold across many different browsing situations, but depending on a user’s circumstances, might be applied in different ways.

People who are blind or have a significant visual impairment interact with websites and apps using screen reader software, which reads content and controls aloud using text-to-speech technology. Since people who are blind can’t see the pointer on the screen, they can’t use a standard mouse. However, the keyboard works really well as an alternative input to point-and-click interaction. In addition to supporting the basic set of keyboard commands, screen readers also provide a complex set of keyboard commands. These commands give users a powerful additional set of tools to interact with web content more efficiently. The catch is that these commands can take users some time to learn and memorize---and there are variations from one screen reader to another, so not all users may be familiar with them. Additionally, as we’ll discuss in the next article, these keyboard shortcuts might not always work as expected if sites and apps are not coded appropriately---so don’t assume that the existence of these shortcuts will overcome a lack of basic keyboard usability.

The keyboard also provides an essential role for people with a wide variety of motor disabilities. People who have conditions that affect dexterity---for example, a tremor or arthritis---might find it difficult or impossible to use a mouse because it is requires too much coordination and precision. People who have illnesses that cause pain and fatigue, such as fibromyalgia or multiple sclerosis, might find using a mouse too physically demanding. A keyboard might offer them a more controlled means of input that does not require extensive movement. People who have very limited capacity for body movement, due to paralysis or loss of limbs, or conditions such as cerebral palsy, may use alternative switch input devices that can be operated with minimal body movement. For example, a switch could be operated through a slight movement of the head, or using a “sip-and-puff” device that responds to different breath patterns. These devices typically emulate the TAB and ENTER keyboard approach to navigation, allowing the user to move focus between onscreen controls with the option of selecting the control that currently has focus. Lastly, people with temporary dexterity issues, for example, due to repetitive strain or an injury, might struggle to use a mouse. Speech recognition software, such as Dragon Naturally Speaking, uses voice for selection and operation of controls, and tends to work better when applications have been designed with keyboard usability in mind.

Some people simply prefer the keyboard as a more efficient input method. It requires less movement and effort than a mouse or other pointing device. Form filling, for example, is likely to involve typing for data entry, so if a mouse is required to move focus between fields, or to select specific data options, then efficiency is reduced and the user is more likely to get frustrated. [caption id="attachment_18400" align="alignnone" width="630"]

Image courtesy of Petras Gagilas.[/caption] Even as touchscreen devices become more common, there’s still a need to ensure careful design that enables people to use tablets and mobile devices with the aid of a peripheral keyboard.So when we say “keyboard users,” we really mean a large and diverse group of people who don’t use a pointing device like a mouse, but instead use different devices for different reasons. And since truly great online experiences are ones that are available to everyone, it makes sense that designers and developers attend to keyboard usability.In the next article, we’ll provide four key areas of focus to help you design great keyboard usability. 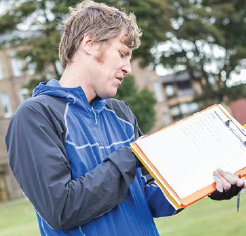 About the author: David Sloan is an Accessible User Experience consultant with The Paciello Group and works with organizations to create digital experiences that are as accessible and positive as possible to the greatest number of users.