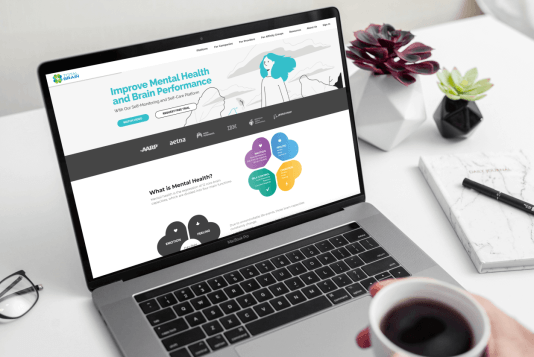 Total Brain, based in San Francisco and Sydney, is a mental health and fitness platform powered by neurotechnology, with over 1 million registered users. The platform helps people scientifically measure and optimize their brain capacities while managing the risk of common mental conditions.

An estimated 70% of the population is experiencing some degree of poor mental health. But of those living with mental health problems, two-thirds receive no treatment. By 2030, that’s estimated to cost $6 trillion globally in direct and indirect costs.

Total Brain believes it can help. The mental health and fitness platform is powered by neurotechnology that screens for 7 common mental health conditions, as well as assesses 12 brain capacities.

Beginning in 2018, the startup relaunched its website and app from mybrainsolutions.com to totalbrain.com with an emphasis on their users. They needed help closing the empathy gap.

Pablo Sanchez Martin, Total Brain’s vice president of design, came to the company after a career helping large corporations with their UX design.

“For some of us, mental health is a subject matter very close to our hearts,” he said. “It is personal, not just business as usual. That’s why, the empathy maps, and the personas we created were the most heartfelt (and hopefully the most impactful) in our careers.”

And he said UserTesting was the perfect tool for the job. “We use the UserTesting platform like a Swiss Army knife, from getting quick feedback on design prototypes to conducting a 300+ person deep dive on user personas,” Martin said.

One of the big projects UserTesting helped with was developing their user personas. “These are your customers,” he said. “It is critical to know who these people are and understand their behaviors and attitudes and why they come to the platform.”

He said Total Brain’s founders and executives—many with PhDs in science—were initially reluctant to accept qualitative research. But watching the video clips from UserTesting and hearing their customers tell their stories and share their experiences with the platform changed their minds.

With this deeper understanding of their users, the company redesigned the user registration flow, simplified the overall experience and expanded and added to the platform’s features and content. That included adding end-user features like a personalized home feed, score trending, personalized recommendations, podcasts, and neuro-optimized music among other additions.

Total Brain’s commitment to better understanding their customers and their pain points has paid off. The average time a user spends on the platform increased by 2.5x and the amount of content consumed by increased 50%. That all resulted in a 91% user satisfaction score.

They have also seen user registrations grow to over 1 million users, and brain profiles increased to 817,000, representing a 33% and 42% year over year increase, respectively.

And all that has impacted the bottom line, too, with ARR increasing 40% year over year.

"We use the UserTesting platform like a Swiss Army knife, from getting quick feedback on design prototypes to conducting a 300+ person deep dive on user personas."